Lots of schematics and articles in old magazines and newsletters on electronic music and electronic instruments ,magazines like Polyphony ,Synapse and Electronotes have so many ,so here's one from Electronotes Issue #42 .

In explaining electronic music to friends one is frequently confronted with a question which is usually asked after many hours of discussion. "Yes , i agree with what you say ,but is it music ?" It is a frustrating question because , at first ,it seems hardly relevant . After all ,if electronic music is artistically valid ,what does it matters if it is music or not ?

And yet the question is interesting in itself .Is electronic music a new art form , or is it a continuation of the art of music ? What is called for to settle this question is nothing less then the definition of music .
Traditional definitions of music have centered around a type of sound being used .A musical tone was one where the overtones were in whole number ratios to the fundamental .A musical composition is one that uses musical tones. \Every very recent critics have accepted this definition .For example Zuckerandl in Sound and Symbol even goes to the extreme of banishing glissando from the realm of music because they can not be perceived as musical tones .
Surely ,if we accept this definition we are immediately in troube - even disregarding glissandos for a moment . What do we do about bells ,for example ?
These instruments (and i doubt that anyone would deny that bells are instruments ) have overtones that are in non-whole number ratios to the fundamental . In fact ,it is precisely the fact that these overtones are in fractional relation to the fundamental which gives them their distinctive quality .yet ,according to the definition of music they should be banished from the realm of music .

Let's go one step further . What do we do about snare drums ,wood blocks ,tam tams,tom toms, and a whole battery of pitchless and near pitchless instruments ? It is obvious ,I would even go so far as to say self-evident that composers use these instruments for stunning musical effect .But if we are going to admit woodblocks to the realm of music , why not Bartok's wind machine in his opera Bluebeard's Castle  .And why not the all percussion pieces of the 20th century .Finally ,when one arrives at the electronic music all hell breaks loose with such pieces as Variations on a Door and a Sigh .It is clear that a traditional definitions based on the type tone employed is simply inadequate to cover even traditional music .it should therefore be dropped .
What we are searching for is a definition that would distinguish between musical sounds and non-musical sounds .We are looking for characteristic which all musical sounds  have in common and which no-non-musical sounds have .
I think we can approach a valid definition of music thru Leonard B. Mayer's definition of sound term . A sound term is  a sound or group of sounds ,simultaneous or successive ,which implies a consequent musical event . In other words a sound which refers to another sound is a sound term . What i propose is to define a musical sound in precisely the saame way ; A musical sound is a sound that can be understood as exclusively refering to another sound .A musical composition would therefore be a sound structure that could be understood as exclusively self-referential .

Notice that these definitions carefully avoid limiting music to any type of sound .Notice also that , according to these definitions ,under certain conditions ,what had previously been labeled musical would now not be considered so .
For example ,a doorbell ,no matter how pleasant it's chimes ,would not be a musical event because it refers to the action of answering the door , not to another sound .At the same time the definition implies that any sound, even a doorbell - is potentially musical if put in the proper context ,a context where the sound is used to refer to another sound .
Notice also that the definition carefully excludes ordinary speech from the realm of music since ordinary speech refers to the external world ,either directly or via concepts ,and is used primarily to manipulate the world .
The idea of defining musical sounds by context as opposed to type clarified many problems and therefore it should be given serious consideration .
Posted by vladribarski at 4:15 AM No comments: Links to this post 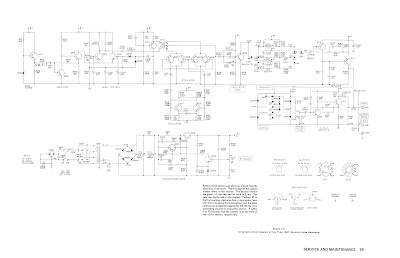 Posted by vladribarski at 6:06 AM No comments: Links to this post

This appears to be very interesting schematic ,i'm not sure what year is it ,can't bother to look now  .General Radio type 1000-P7 Balanced Modulator ,the full service manual is available online along with few Generators and similar test equipment built by this company . 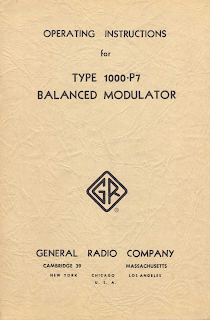 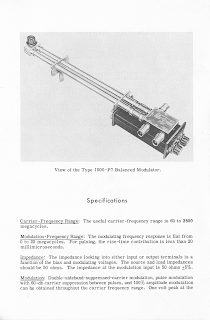 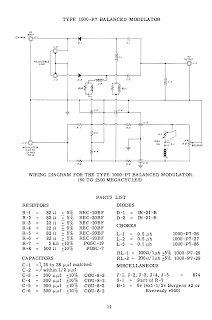 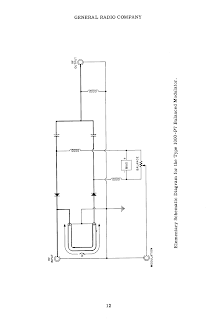 Posted by vladribarski at 5:02 AM No comments: Links to this post

These filters are popular i guess , i know very little about these and it seems all the service manuals from this company are just business to few keeping it away from public ,it's nice to see inductors in a filter tho i never used them ,people say they make lot of color ,if anyone has info on filters from this company feel free to share it if you will ,it would be something to clone these ,even not vcf 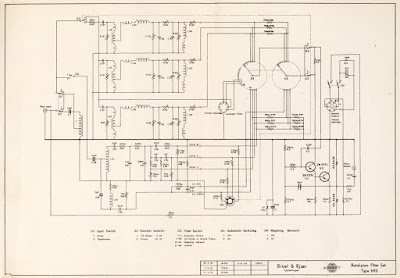 Posted by vladribarski at 9:32 AM 3 comments: Links to this post

i recorded a bit this last month or so ,i know people collect their recordings over longer period of time and then select the best ,but sometimes i don't play much at all ,i like to make a module and enjoy those first hours playing it ,expecting new sounds .you can download these in waves ..it's just my homemade synthesizer ,mostly serge modules but not limited to ,this time i just enjoyed whatever there is available in the system ,the old Serge R6 VCO's are dominant in the recordings along with NLC Neuron ,111 Buchla Ring Mod and VEWA Vocal Filter from Electronotes .

Posted by vladribarski at 12:17 PM No comments: Links to this post

an article from the italian Onda Quatra Magazine for a Fet Compressor ,from 10.1978 ,in the article there is also a pcb layout for the compressor . 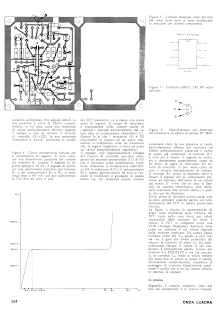 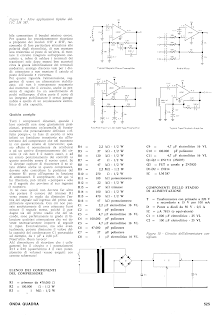 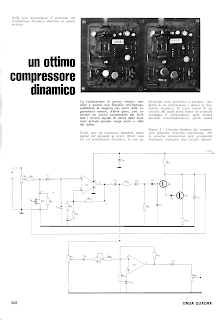 Posted by vladribarski at 6:52 AM 5 comments: Links to this post

The current state of my Synth . 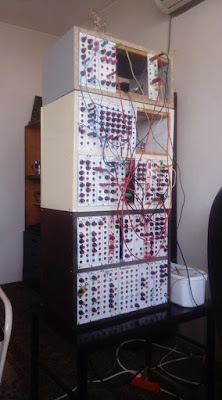 Posted by vladribarski at 3:10 AM No comments: Links to this post 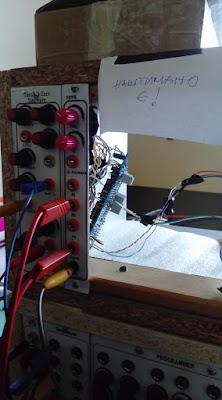 Posted by vladribarski at 11:53 AM No comments: Links to this post

this is not much of a review and more of an appreciation of great piece of software and really amazing effort done by Blue Hell @ electro-music.com .
WREN is a wall size modular ,with stuff you can't find in the world of hardware ,i believe it's almost entirely programmed by Blue Hell ,over many years ,and it's free .it has over 250 modules to choose from ,installation in windows is very simple ,it default resolution is 88kHz but you can change that to your taste ,it supports midi so you can plug in your controllers and also it's mentioned that it works with Jack for Linux. 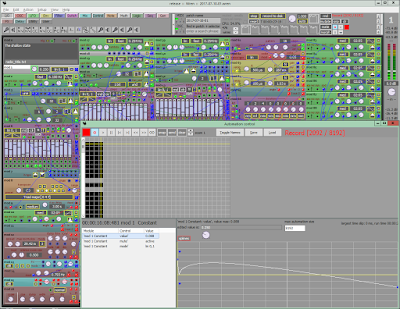 you can find it here with zip file containing all the modules : https://bluehell.electro-music.com/wren/index.php you can hear WREN it on noodleradio @ electro-music.com

Posted by vladribarski at 10:26 AM No comments: Links to this post

Part of my new panel ,i think this will be the last part of the synth i'll be making for myself as i think 5 x 17 inch panels are enough for playing around and making some atmospheres or effects ,patterns ..this is mostly Electronotes panel and i hope i'll make it right ,i am big fan od electronotes ,it is what today are forums like electro-music or muffwiggler ,only better ..for some folks .Just finished the Vewa filters and Option 4 VCO , i hope the rest of the build will go smooth as these ,can't wait to play with the high ripple filter and the additional phases available at the PCB version of the 4 Pole Filter Network .

Posted by vladribarski at 1:39 PM No comments: Links to this post

here's another demo . i just finished this vco from Mordent Design which is actually Electronotes VCO from issue #75 i believe ,it's a thru zero VCO ,the newer Electronotes Zero VCO might behave smoother when crossing zero , but anyway i like this older version a lot too ,here's a short recording of it making vowel like sounds ,this part might not be thru zero i didn't checked on scope .

Posted by vladribarski at 12:08 PM No comments: Links to this post

Get an Affordable 4U Format Modular Synthesizer

Offering Serge-esque Panels !  These are mostly Serge Panels ,i make use also of few Wiard and Buchla Modules ,configuration can change ...